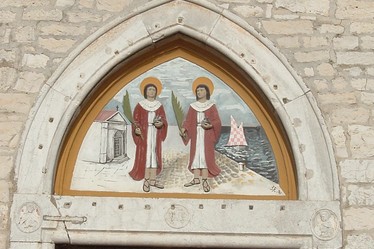 Under the stone “mast” of the bell tower, the square in front of Fažana’s Parish Church of SS. Cosmas and Damian resembles a ship deck which by the local fishing tradition and new challenges communicates in a special way with time and generations of its inhabitants and guests. The figures of the patron saints of this parish, recorded in documents since 1150, greet us from the relief on the stone facade above the church entrance. Most probably twin brothers, Cosmas and Damian were holy physicians who were born in Arabia and studied medicine in Syria. They practiced the art of healing without charging fees, preaching Christianity in the area of Aegean Cilicia in present-day Turkey. They treated people and animals and accepted no payment for their services, and as Christians were sentenced to death and beheaded in 303. The feast day of Saints Cosmas and Damian is celebrated on September 26.